HOW WAS IT PRODUCED
FRENCH ACTIVATED CARBON?

Ancestral Roman know-how and craftsmanship: carbonization in millstones
Still produced by craftsmen, on the land of our carbonizer supplier who carries on a family business tradition that goes back to 1876. The wood to be carbonized is sealed in an air-tight space with earth, straw and tree bark.

PROCESSING THE WOOD MILLSTONE
After adjusting the branches, they are placed one against the other to form a circle around the center that will function as a chimney.

FINALISATION OF THE MILLSTONE
The millstone can measure up to 6 m in diameter. It is then covered with earth and straw to "smother" the wood.

LIGHTING OF THE MILLSTONE
The millstone is ignited by blowing hot embers through the central hole. Once the fire has ignited, this hole must be plugged. The wood is carbonised for 3 days and requires day and night monitoring.

CHARCOAL PROCESSING
After 3 days of combustion (900° to 1200°), the millstone is opened to pull out the carbonized wood with rakes to drag it into the ground (same as Japanese Binchotan Charcoal production). This procedure allows the charcoal to cool down and prevents its ignition.

First up, in 1813, was French chemist Michel Bertrand who swallowed an otherwise lethal dose of arsenic mixed with activated charcoal and survived. It was exactly 5gm of arsenic trioxide mixed with charcoal1 that Bertrand consumed, but other less fortunate scientists had difficulties confirming Bertrand’s findings over the following years, probably because the absorbing properties of the charcoal varied according to preparations2, and interest in the potentially life-saving Activated charcoal died down.

Pierre Fleurus Touéry activated charcoal poison testerIn 1831 Professor Pierre-Fleurus Touéry, a pharmacist out of Montpellier France, decided to outdo Mr Bertrand and demonstrate the effectiveness of activated charcoal… again by putting his life at risk. Touéry’s demonstration, which was performed in front of the French Academy of Medicine (Academie Francaise) saw Touéry ingest a dose of strychnine, that was ten times higher than what was required to be a lethal dose3. To put that in context, Strychnine is rumoured to be the poison that killed Alexander the Great and its symptoms are said to be some of the most painful symptoms a person can experience by ingesting a toxic substance. In Alfred Hitchcock’s movie Psycho, the main character of the movie – Norman Bates – kills his mother and her lover with strychnine.

Touéry took 15 grams of activated carbon along with his lethal dose of strychnine and stood in front of his audience as they all watched and waited in awe. They kept waiting, and waiting… yet nothing happened. Touéry’s shocked audience watched as the professor walked away from the event unharmed ~ proof enough for the medical community that activated charcoal benefits were real and worth researching further.

How Does Activated Charcoal Work? 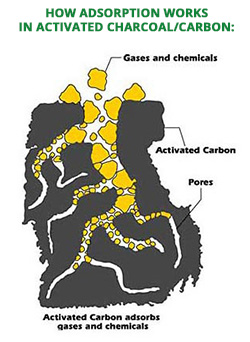 The charcoal is “activated” because it is produced to have a very fine particle size. This increases the overall surface area and adsorptive capacity of the charcoal. The additional processing of the carbon to make it ‘activated’ is what separates it from regular charcoal briquettes like you might use in your outdoor grill.

Follow the refer link to find the product : https://takesumi.co.uk/collections/french-activated-charcoal